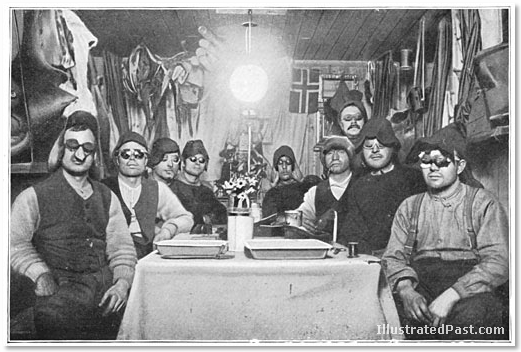 Journey to the South Pole

A Map of Amundsen’s Journey to the South Pole

Antarctica is the coldest and most inhospitable continent on earth. There are no permanent human settlements; the entire population of Antarctica consists of several million penguins and a few hundred scientists.

But while the continent is still incredibly harsh and isolated, it is much closer to the rest of the world than it once was. Regular air links allow personnel to cycle in and out, without fear of being locked in by ice for months or even years.  And cruise ships now bring tourists to this far off land.

It is perhaps difficult to imagine that only a few decades ago, most of Antarctica had not yet been explored, and any trip to the continent required explorers to be separated from their families for years, living off unhealthy diets of canned food, and facing the ever resent risk of death from cold and starvation.

Below is a collection of photographs of Antarctica taken by the Norwegian expedition to the South Pole in 1910-1912 led by Roald Amundsen. This expedition was better equipped and planned than its predecessors and succeeded in reaching the South Pole first; another expedition by the British explorer Scott also reached the Pole but did so a few days after the Norwegians. The Scott expedition perished attempting to return to its base camp. 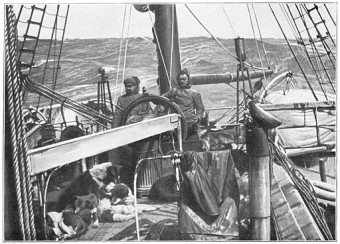 In his book about the expedition to the Antarctic, Roald Amundsen wrote that he had originally planned an expedition to the Arctic ocean aboard his ship the Fram.  The preparations were already far advanced, even the date of departure was established in early 1910, when suddenly the news spread of the arrival of Peary to the North Pole.Amundsen wrote that “Immediately I understood that the future of my plan in danger. Only a quick decision could yet bring salvation, and so I immediately decided to change my plan to turn the South.”

Given the logistics of changing the expedition from the North Pole (which is not that far from Norway) to the South Pole which required an enormous journey from Norway to Antarctica and then an extremely long overland journey across the unmapped frozen fields of Antarctica, it is amazing that Amundsen would make such a decision on the spur of the moment; it is perhaps even more amazing that he succeeded in reaching his destination. 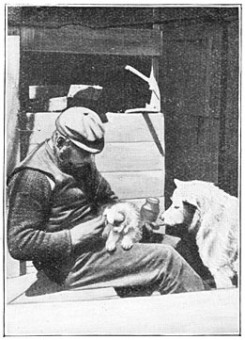 Members of the Antarctic Expedition: Human and Sled Dogs 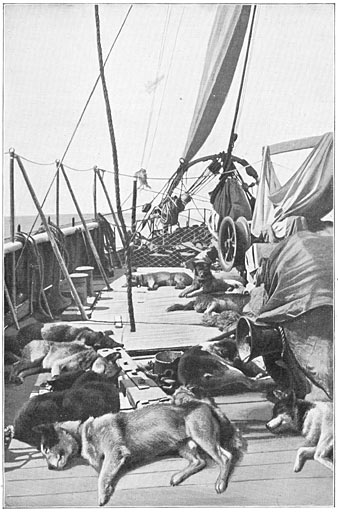 Life on Board Ship The sled dogs are relaxing. Little do they know what awaits them. Run fido! They are going to eat you once the food runs out.

During the long journey south to Antarctica, the men and sled dogs of the expedition enjoyed a leisurely life, which would be in sharp contrast to the hardships that they would soon face. Amundsen spent encouraged his team members to learn about the conditions they would face by reading books about arctic exploration. He wrote

I consider it an urgent necessity, that each of us be aware of what has already worked in the parts where we go. That is the only means  to become familiar in advance with the difficulties which we will have to fight.With that intention I brought a library of Antarctic travel consisting of the books of  Cook and James Ross, of Commander Scott and Sir Ernest Shackleton too.The different books are read avidly, especially the latter two. The book of Scott and Shackleton, who wrote fascinating accounts  accompanied by beautiful plates are always required. So therefore the theoretical education of the employees started vigorously. 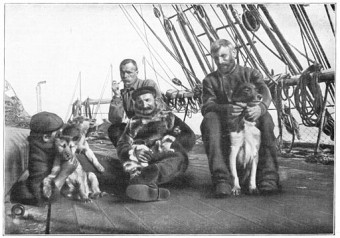 Members of the Antarctic Expedition With Their Sled Dogs 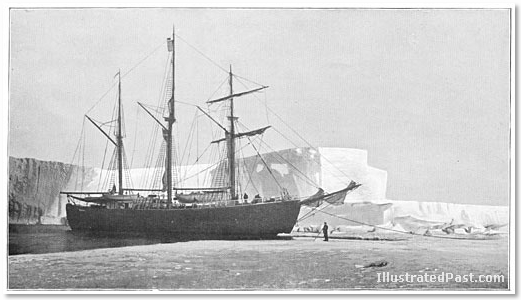 Above is a picture of the expedition’s sailing ship upon its arrival in Antarctica. In the background is the Great Barrier, a wall of sheer ice. 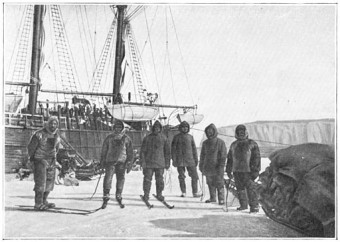 Upon arrival the members of the Norwegian expedition began offloading their supplies. Dog sleds were used to move the heavier loads. The men put on skis. 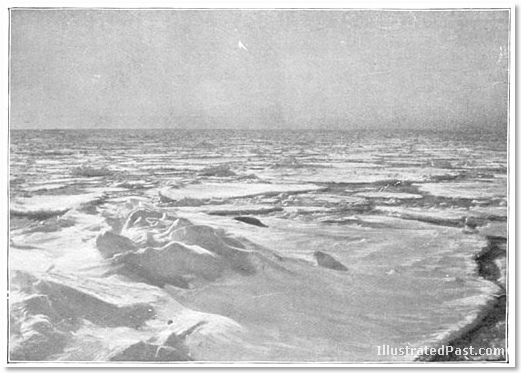 Antarctica: The pack ice in the northern Ross Sea. 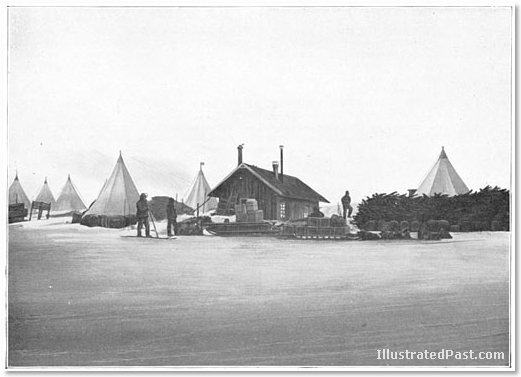 The Antarctic Base Camp. Tents and prefab log cabins.

Amundsen’s expedition was highly organized, which would give him aan edge against the unforgiving elements. The explorer described the expedition’s system for organizing it’s supplies:

The 18th of January we will begin transporting the building material. … All pieces were numbered before the departure and stored in the order in which they should be used so that it will be easy to find it has everything at hand. 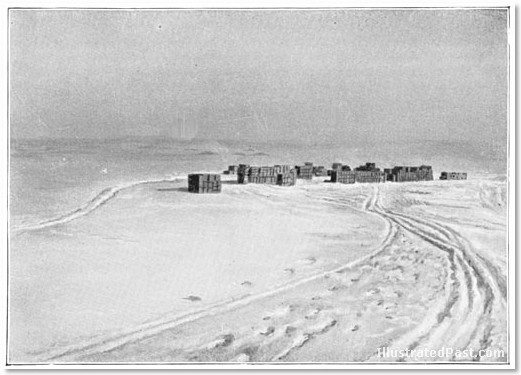 The Base Camp from a Distance

Amundsen had brought a number of Eskimo dogs with him because they were adapted to the harsh cold weather. He described the dogs as intelligent and capable of learning tricks and to some extent capable of bonding with their human masters, but also described them as wild, the products of an unforgiving fight for survival:  “In their mutual relations, these animals know no other law than that of the strongest. 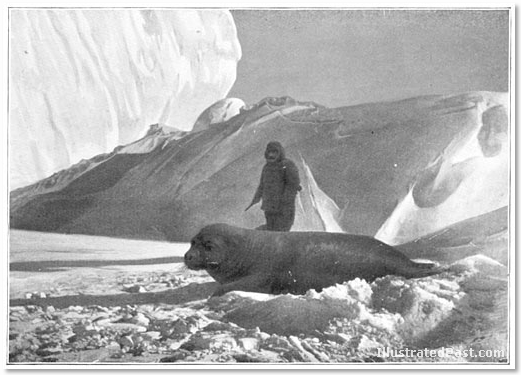 Life at the base camp was crowded:

Our common room has ten beds, but since we were nine of us, one bed was put away, and replaced by the crate of the chronometers. The meteorological instruments are hung in the kitchen, the only place we have available. In the attic were we stored  the drugs, the syrups, the jams, pickles and sauces and the cream, and we also brought in the library 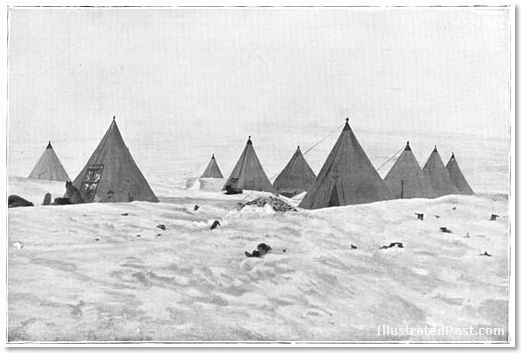 Antarctica: the tents for the dogs 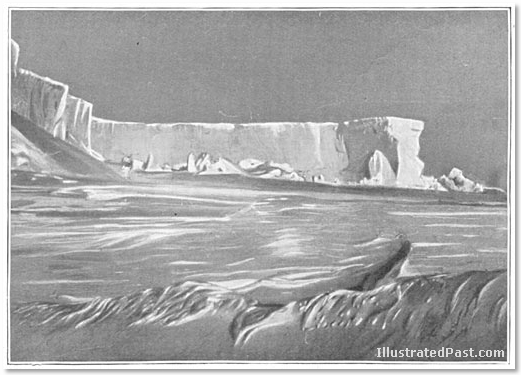 Cape Manhue, the front of the Barrier to the Bay Walvisch. 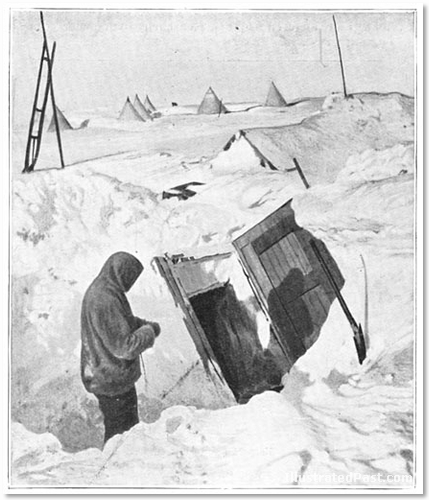 Entrance to a Snow Hut – Antarctica 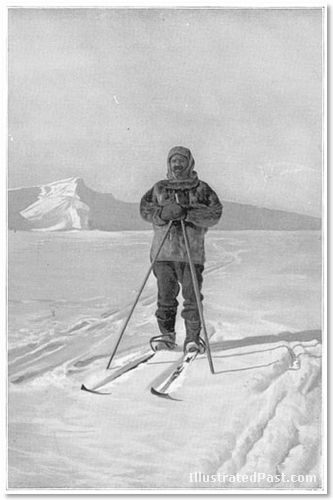 Antarctica: An Expedition Member on Skis

“Checking our equipment was a lot of work. The subject footwear should be thoroughly discussed. The majority is a model of rigid boots, where some changes will be made, others are flexible boots. For the moment it is not so important, and each was allowed  to choose his own boots. I vote for my boots with heavy soles and soft upper pieces, which are wide enough to store several pairs of stockings.” 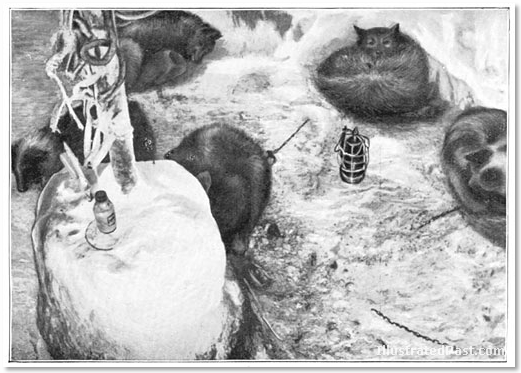 In a tent for the dogs. 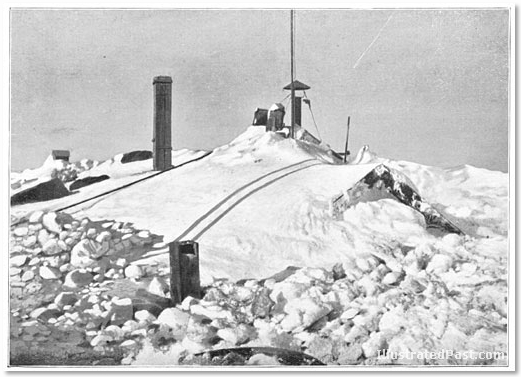 The Antarctic Base Camp – the Huts Buried in Snow, with Chimneys Sticking Out 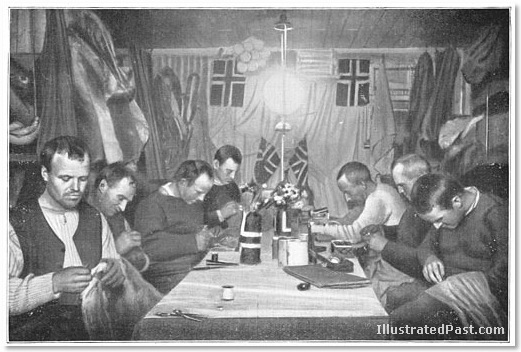 The Men Spent the Time Mending their Gear

The relative comfort of the base camp would not last forever. The men waited for the right weather to start their journey inland. While  they waited the men spent the time getting their gear ready. 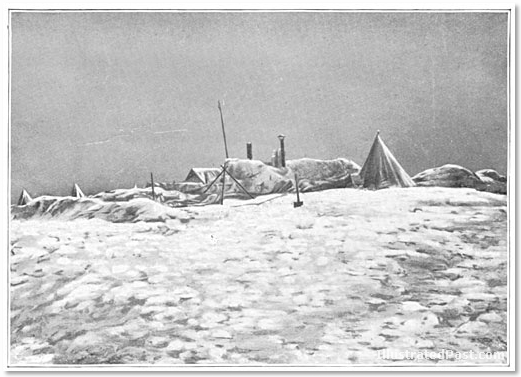 An Antarctic Winter: much like an Antarctic summer ony much much colder. 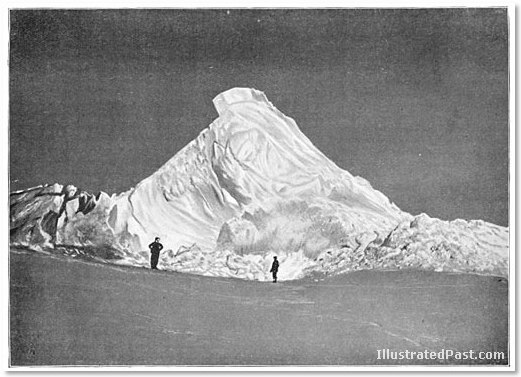 Antarctica: The Ice Barrier Near the Base Camp 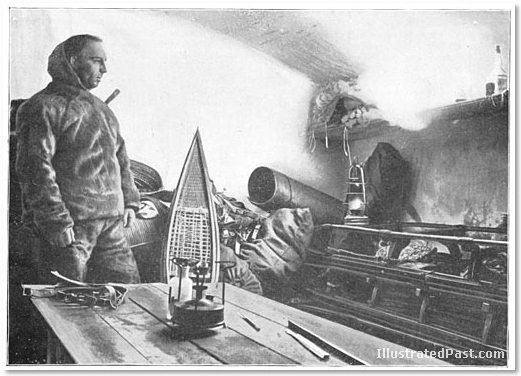 The different models of snow goggles.

In the picture above the men show off their hand made snow goggles. Protecting their eyes from the relentless glare of the sun reflecting off of the snow and ice was essential; otherwise a man could become snow blind. 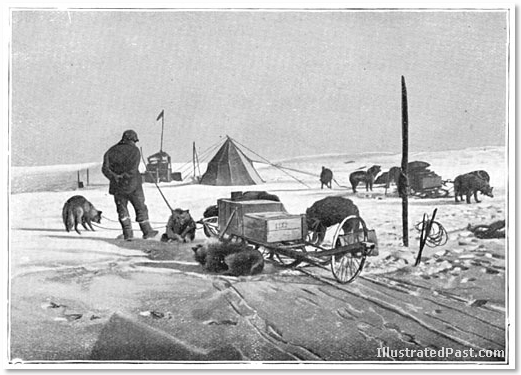 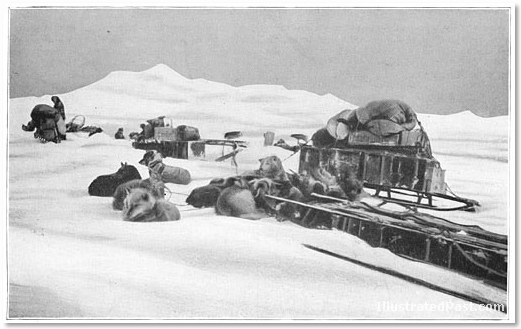 Getting Ready to Leave: Our four runners, each with 13 dogs harnessed.

Finally, the weather allowed the expedition to start their journey to the South Pole. The men and the equipment were ready; the dogs in harness. It was time to go. 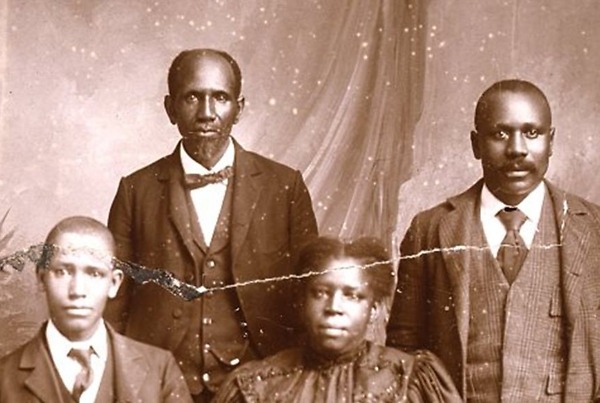 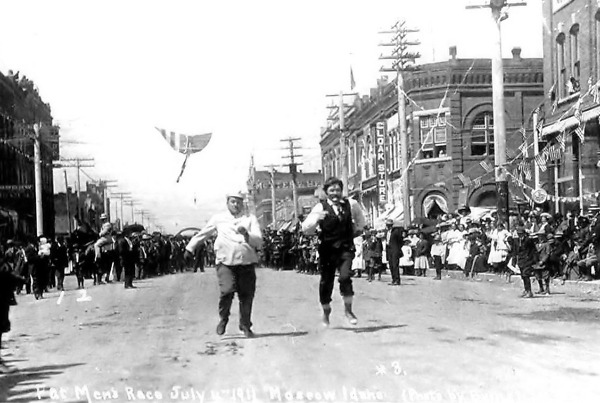 In these politically correct times, when it seems people take offense at the slightest "microaggression,"…
illustrob 0