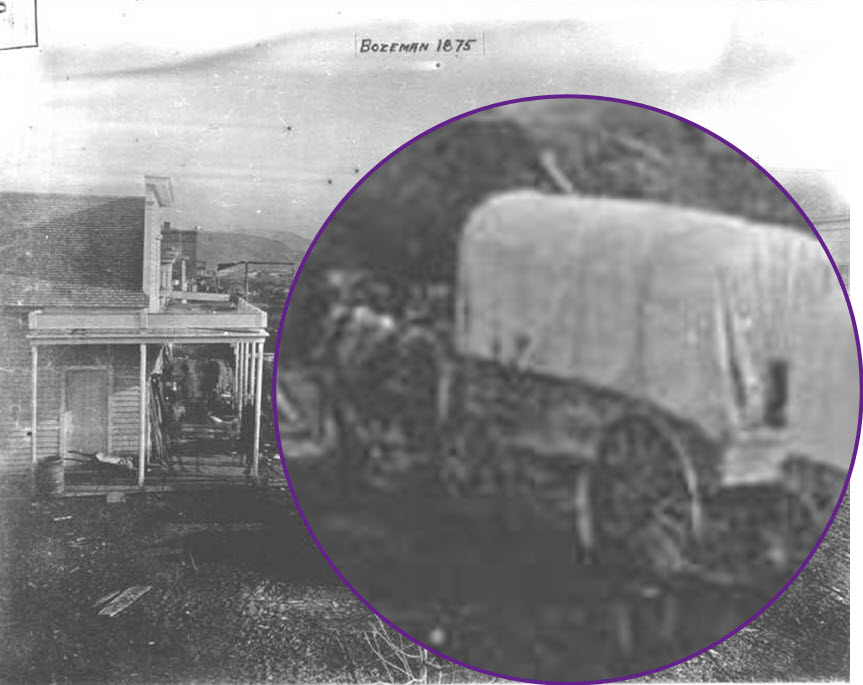 In this picture a group of covered wagons makes its way down the muddy main street of Bozeman, Montana in 1873. The caption on the top of the photograph says 1875, but records indicate that the photograph was actually taken in 1873.

Bozeman had been founded in 1864, less than ten years before this photograph was taken. The town is named after John Bozeman who helped establish the Bozeman Trail. The Bozeman Trail was an important overland wagon route that connected the gold rush settlements of southern Montana with the Oregon Trail that passed through what is now Wyoming.

The town was located in a fertile agricultural and cattle-raising area and its location on the transportation corridor soon boosted its population and importance. By 1873, when this photograph was taken, Bozeman featured many important amenities such as a daily newspaper [established 1871], a library located in a room above a drugstore [established 1872] and even a three-story brick building [seen on the right of the photograph], which was a rarity on the American frontier. However, it still had no paved roads and the photo reveals a muddy main street.

Below we have an enlarged view of the wagons on the street:

And here are more closeups of the wagons. The photo is interesting for showing these prairie schooners, so important to the settlement of the Old West, as they really moved and maneuvered. It almost looks like rush hour for the wagons.

The horse drawn wagons, nicknamed prairie schooners, ferried settlers and supplies from the East to the booming frontier of the Old West. The usually traveled in convoys called wagon trains for protection against Indian attacks, which were still a danger facing settlers as they moved out west. As recently as 1868, Red Cloud’s War between the United States and the Indian tribes in the region had temporarily shut down the Bozeman Trail and left the town isolated.

The covered wagons were heavy wooden carts drawn by a team of horses. The canvas awning provided some protection from the sun to its passengers and cargo, but there was no protection from the endless dust, flies, and rough roads which shook the occupants with bone-jarring jolts as the wagons, which lacked any suspension system or rubber tires, rumbled over thousands of miles of rough terrain.

Below we can see an enlarged view of Bozeman’s ultra modern brick building, a sign that this town was not going to fade way like so many other boom towns but was here to stay.

Today, Bozeman is a modern fast-growing community and one of Montana’s largest cities. Below is a view of the same street, roughly 150 years later. No covered wagons but plenty of cars and trucks.