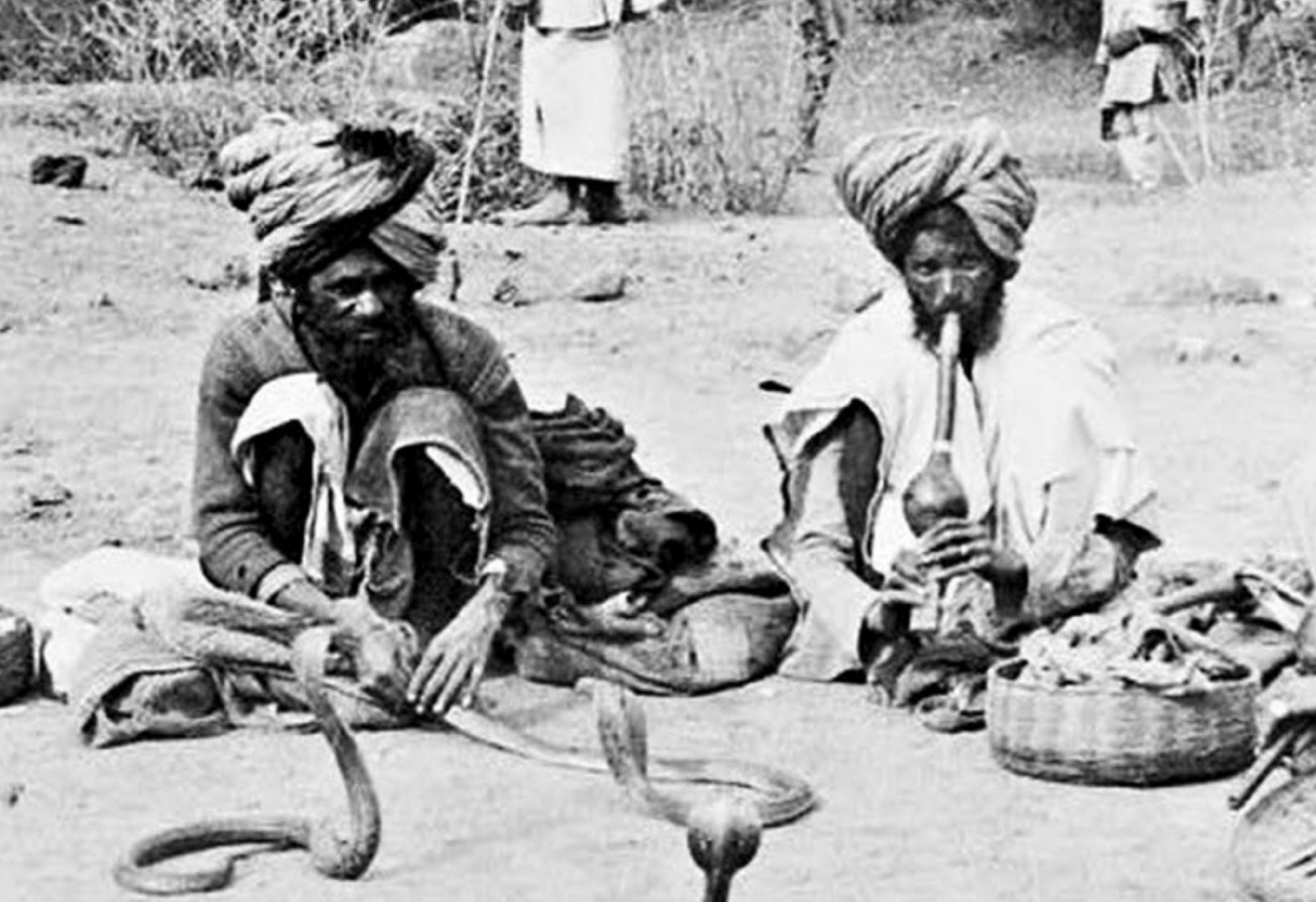 Snake Charming is an ancient tradition that is believed to have originated in India during the remote past. From there, the practice of snake charming spread to Egypt and North Africa, where it is still practices today in somewhat basic forms.

These rare photos from the early 1900s show various Indian snake charmers, street performers putting on snake charming shows in order to earn some coins from on-lookers. I have enhanced the photos by adjusting the color and sharpening the details. Later in this article I provide magnified views of parts of the photographs so you can get a look at the snakes and the snake charmers’ equipment. The photos were originally published as stereographs, a popular format in the early 1900s, which allowed you to view images in 3D.

Indian Snake Charmers are a class of entertainers who put on shows in which they seem to hypnotize dangerous snakes such as cobras and make then sway to the music of a flute. Traditionally Indian snake charmers traveled from town to town seeking new audiences. In many cases, the profession of snake charmer is hereditary and passed on from father to son; there is even a caste whose members are not allowed any other employment besides snake charming.

The tradition of snake charming lives on in modern India, now geared primarily towards Western tourists who are wowed by the performances and often pay extra to take a photo with the dangerous snake.

Here we have a magnified view of some details of the first photo:

Note the large number of snakes that this charmer is handling at once. He even has one around his neck. This photo was taken in 1907 India.

In the stereograph photo above we see a group of snake charmers and their snakes. These fellows have diversified their show, and also have a bunch of monkeys that they must have incorporated into their act. It is interesting that the monkeys do not show fear of the snakes right next to them.

Below is a closeup detail of the snakes and the monkeys:

And next we have a portion of a stereograph (the right half only) which has been cut away and enlarged. First let’s look at the picture and then focus on some interesting details.

Note how two of the Indian snake charmers are using their traditional flutes to charm the snakes, which have emerged from their baskets.

The Cruel Truth About Snake Charming

As with stage magic and other performances of that type, snake charming is not quite what it seems. Although the snake does seem to sway to the music of the snake charmer’s flute, the snake is not influenced by the music but by the movement of the flute, which the snake interprets as a predator trying to eat it. As a result, the snake moves in sync to the perceived threat, and raises its hood in an attempt to intimidate the flute. The poor snake is therefore subjected to the stress and fear of being eaten at every performance.

Even worse, the snakes are not really that dangerous because they have either been de-fanged or their mouths have been sewn almost completely shut so that they cannot bite. This is the cruel secret that allows the snake charmers to handle deadly cobras with impunity. As a result, the snake will invariably die a slow and painful death from starvation for the sake of entertaining tourists and passersby.

In the video below we can see modern snake charmers in India. The performances have not changed that much from Old India, it seems.

Insightful thread. Tight slap for anyone who still thinks India is a land of snake charmers. https://t.co/hzzUM60pAc
Find this content useful? Share it with your friends!