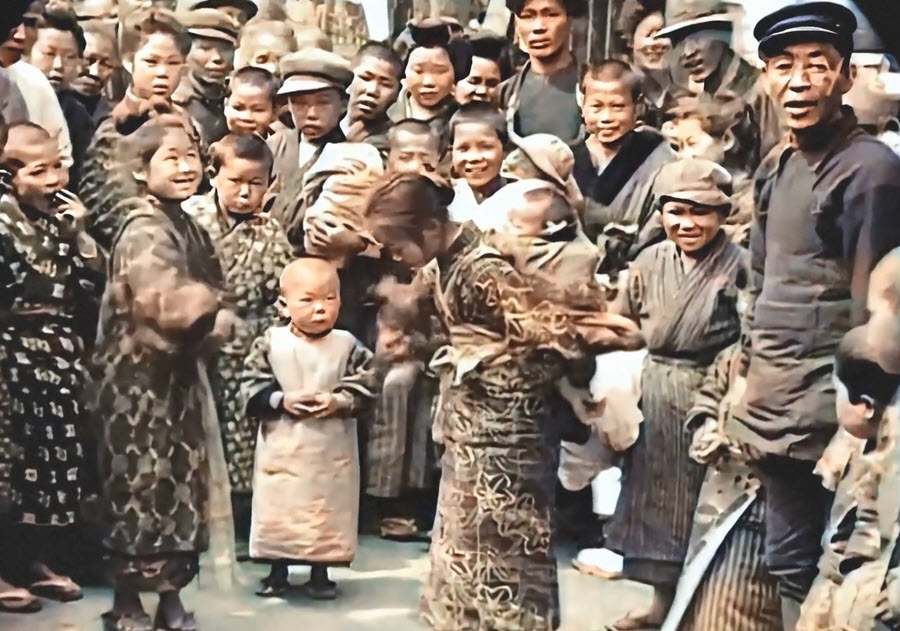 This remarkable video shot on the streets of Tokyo, Japan shows daily life in the Imperial Japanese Capital in 1913. The original film was in black and white and soundless. This video has been upscaled and colorized using a neural network. The colors are the program’s selection and while they make the scenes more lifelike, they do not represent the actual colors of the clothing or other things seen on the video.

One of the things I found remarkable and unexpected is how natural and open the Japanese people are in this video. Men and women mingle freely, laughing and smiling as they go on their daily tasks. They are not shy of the camera at all, even though being filmed would have been a completely novel and unusual experience for them.

They are all wearing traditional Japanese clothing, which has now almost completely disappeared and is today only worn on special occasions or at religious festivals. Women can be seen carrying children on their backs in traditional baby holders. Once in a while, a man in westernized clothes, a suit and tie, can be seen, but these vanguards of a new age are still rarities in this film.

There is in fact little evidence of modernity or modern technology; no cars or even telephone wires are to be seen. The people in the video are engaged in traditional occupations, most of which have disappeared forever. There is a street vendor walking around selling shaved ice. There is a man pulling a rickshaw. People smile and play, loiter and haggle over prices; the scene would not have been out of place 100 years before.

Yet the Japan depicted in this short film was in the midst of enormous change. Less than 70 years before the closed nation of Japan had been opened to the world and to trade by Perry’s White Fleet and since then Japan had been engaged in a program of rapid industrialization and modernization. Less than 8 years ago its army and navy had defeated the Russian Empire in the Russo-Japanese War, and in less than three more decades, Japan would be modern and industrialized enough to challenge the United States and the rest of the world for supremacy over Asia and the Pacific. It is hard to believe that these images, depicting a society and level of technology not much different than the middle ages, would have been able to field battleships, tanks and airplanes in just a few decades. It speaks at the rate in which societies can be fundamentally transformed.

I have made some still shots of these vintage Tokyo street scenes.

I just love this picture of happy Japanese children dressed in traditional clothing. Sadly these children would have lived to see the horrors of World War 2, and their lives would have been be-set by undreamt of change. But on this day in 1913, they could just be kids laughing as the cameraman filmed them.

This Tokyo street is lined with pennants on poles that look almost like trees. The street is full of pedestrians and there are no carriages or automobiles. The only horse is being ridden by a a solider. Everyone else is on foot.

Once again, notice the complete lack of carriages, automobiles or even horses on the streets of Tokyo during this period. Everyone is walking. The only wheeled conveyances are a bicycle and a rickshaw, both human powered.

In the picture above we can see men and women hanging around a street restaurant stall. I am not sure what they are serving.

In the above picture we see men. women and children going around their business. There are little shops in the background. In the foreground, a man is giving a little girl something, while her siblings wait their turn.

In this vintage photo we can see a busy street in downtown Tokyo. A man is pulling a car by hand. There is a group of soldiers on the right. Once again there is no evidence of wheeled transport, no horses drawn carts, no automobiles; the only cart is being pulled by a man.

Above is another scene from a busy Tokyo street. You can see a number of carts, probably used for hauling merchandise. They are all designed to be pulled by human beings instead of horses. There seems to be something going on around the cart in the background, with a group of people clustering around it; perhaps it had just delivered some in-demand products.

And so now we come to the end of our trip back in time to 1913 Tokyo. It is time to wish these people well and return to our own time. Sayonara!