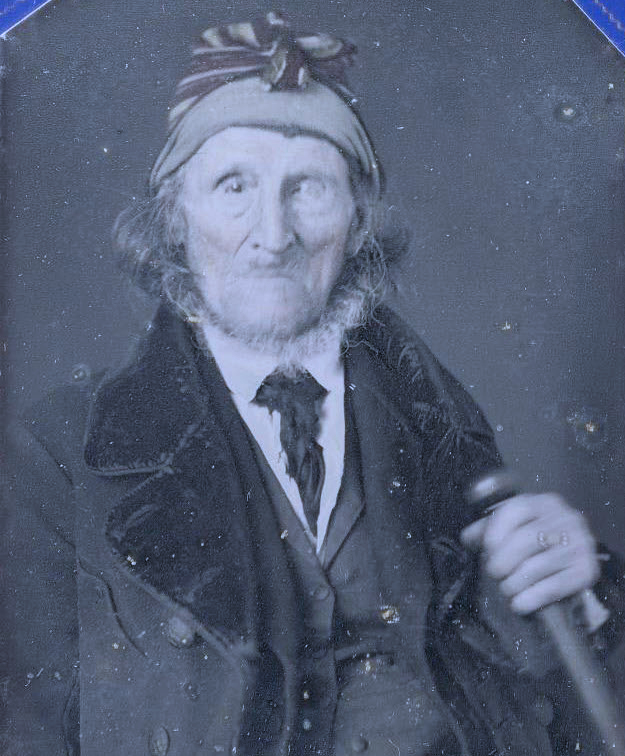 Every photo is like a time machine, capturing a moment in time and then transporting it frozen, like a prehistoric insect caught in amber, to the present day. However a photo does not just bring the picture with it, it brings a bit of the history that led up to that moment; for every photograph has a backstory.

One of the most fascinating historical photographs is also one of the oldest, and captures one of the few images of the men that fought in the American War of Independence. It may even be a picture of one of the earliest-born people, reaching back to capture the image of a man who was born before there was a United States, and before photography had been invented.

This is a daguerreotype photograph of Baltus Stone, a veteran of George Washington’s army who fought in the American Revolutionary War. Baltus Stone posed for this photo in 1846, when he was 103 years old. It was the last year of his life; Baltus Stone would die shortly afterwards, leaving little trace of his eventful life except for this photo.

According to his obituary, Baltus Stone had enlisted in the Revolutionary Army together with his father, who died in the war. The younger man fought with George Washington in every campaign of the Revolutionary War including the momentous Battle of Bunker Hill. He was captured by the British at the Battle of Long Island but was later released in a prisoner exchange and re-enlisted as a wagon driver.

Despite his many battles, Stone came through the war unscathed and unwounded. Later in life, he received a government pension starting in 1818, which he collected for many years thanks to his very long life. He remained independent and was able to walk unaided except for a walking stick up until a few months before his death. Baltus Stone is buried at Arlington Cemetery.

When the photo was taken, Baltus Stone had already lived a life time after the eventful events of his younger years. Over 70 years had passed since he had fought against the British in the American War of Independence. After the war, Baltus worked as a day laborer until old age forced him to rely on a government pension. What was his life like in the seven decades after he was discharged from the Continental Army? His grizzled face and hands speak of a hard life.

His obituary reads as follows:

The venerable Baltis [sic] Stone, well known in Southward [presumably Southwark, South Philadelphia] as the oldest inhabitant, & a veteran of Revolutionary times, died on Thu. Last. At an early age the dec’d entered the army as a rifleman, along with his father, who sealed his devotion for his adopted country with his life’s blood. Baltis Stone was with Washington in every campaign of the Revolutionary struggle, & witnessed the battles of Bunker Hill, Trenton, Germantown, Red Bank, & others, & yet escaped without receiving a wound. He has received a pension from Gov’t, as a reward for these services, for many years. He was 103 years & 16 days old at his death. He was able to walk, supported by his staff, until within a few months past.

Baltus Stone is a contender for being one of the earliest-born people ever photographed. However, the distinction is disputed by other centenarians whose images were captured by daguerreotypes around the same time, especially another Revolutionary War veteran named Conrad Heyer.

Regardless whether this really is the earliest photo of an American Revolutionary War soldier, it is an amazing picture. We can get an idea of the man and his life by looking closely at the daguerreotype photo.

The first thing that stands out is his eye, which does not look normal. Is he missing an eye? A close up of his face suggests that his eye is not missing but that it only looks that way because he blinked or moved while the photo was being taken.

It is also interesting to look at his hands, those of a day laborer in pre-industrial America. He is holding a cane, and there is a bit of a blur here from Baltus moving his hand while the photo was being taken. Perhaps he was suffering from tremors in his old age.

Another close up magnification shows us the interesting cravat that the man is wearing. Baltus had obviously dressed up for the occasion of the photo shoot and is wearing a tie. It is interesting to see how it is knotted, and how fashion has changed in the last 115 years, not that Baltus Stone was likely to have ever followed any fashion trends.

Although the American War of Independence has faded into myth, mythologized by historians and painters who depict an heroic George Washington and his men as a past that never really was, here is a flesh and blood remnant of a time that still resonates today.