By Jerry MooreDecember 9, 2014No Comments

Here are some interesting photographs of bathing beauties and beach goers at some popular resorts throughout the United States, including Atlantic City, at the beginning of the 20th century. Looking at the way their bathing suits covered almost every inch of their bodies, both male and female, we can really see how much standards of decency and modesty have changed.

The first in the series is a panoramic shot showing beach goers at Atlantic City in 1908. It’s also interesting to see how much fatter we have gotten. Almost no one on the beach would be considered obese today.

They were also incredibly overdressed and dandified. I get the fact that standards of modesty at the time meant that your bathing suit was not allowed to show much skin. But going to the beach in a suit and tie, that’s a bit much even for the 1900s, isn’t it?

But apparently not. Here is a photo of beach goers in Venice Beach California. 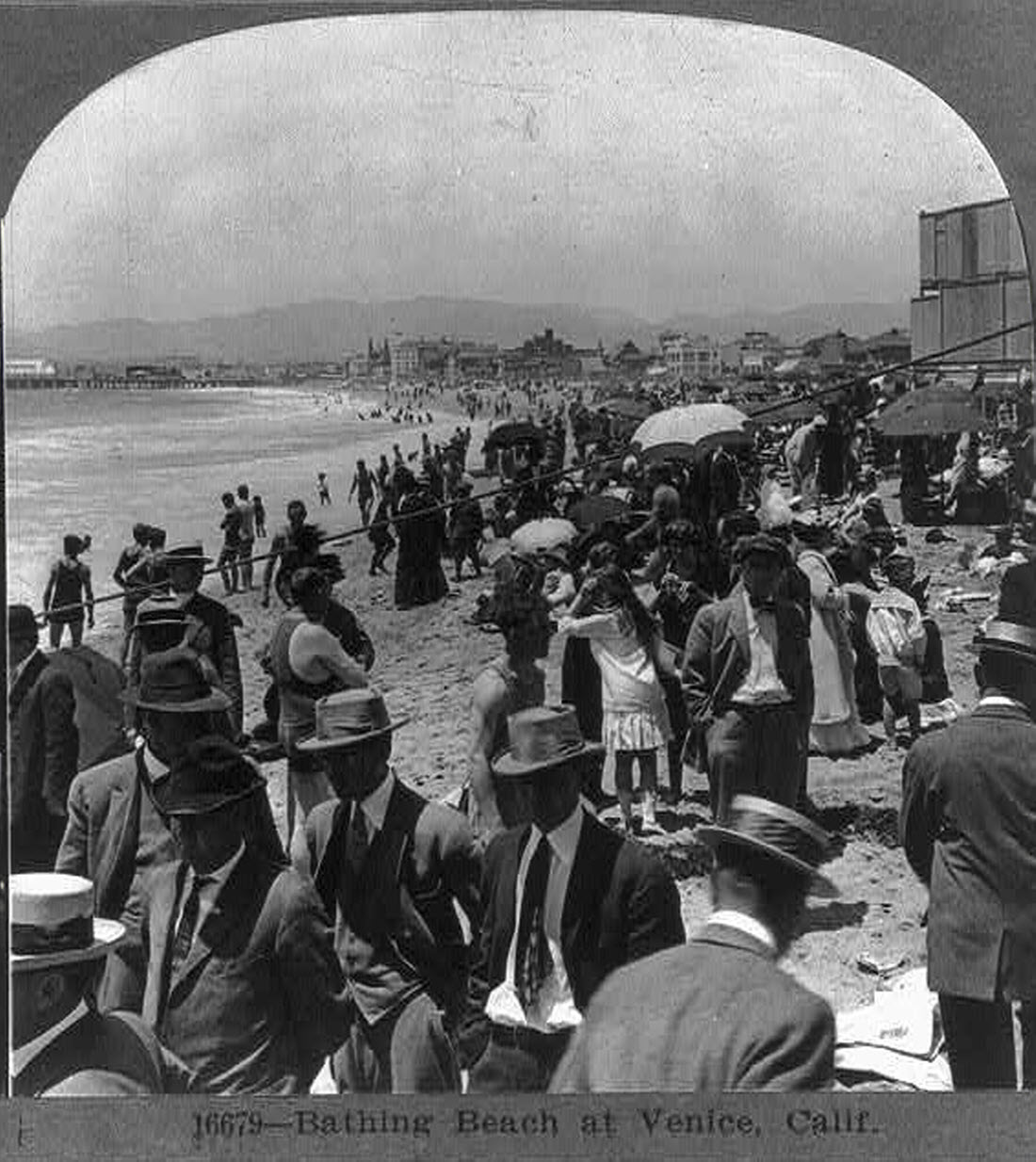 If I didn’t know better I would have thought that this was a picture of an accountant’s convention.

Besides the quaint bathing suits, it is interesting to notice just how few women there are on the beach. Good girls just did not go to the beach, no matter how much they covered up.

When women did go to the beach they tended to do a lot of people watching. In this photograph a group of women have literally installed themselves in a viewing gallery to watch the beachgoers: 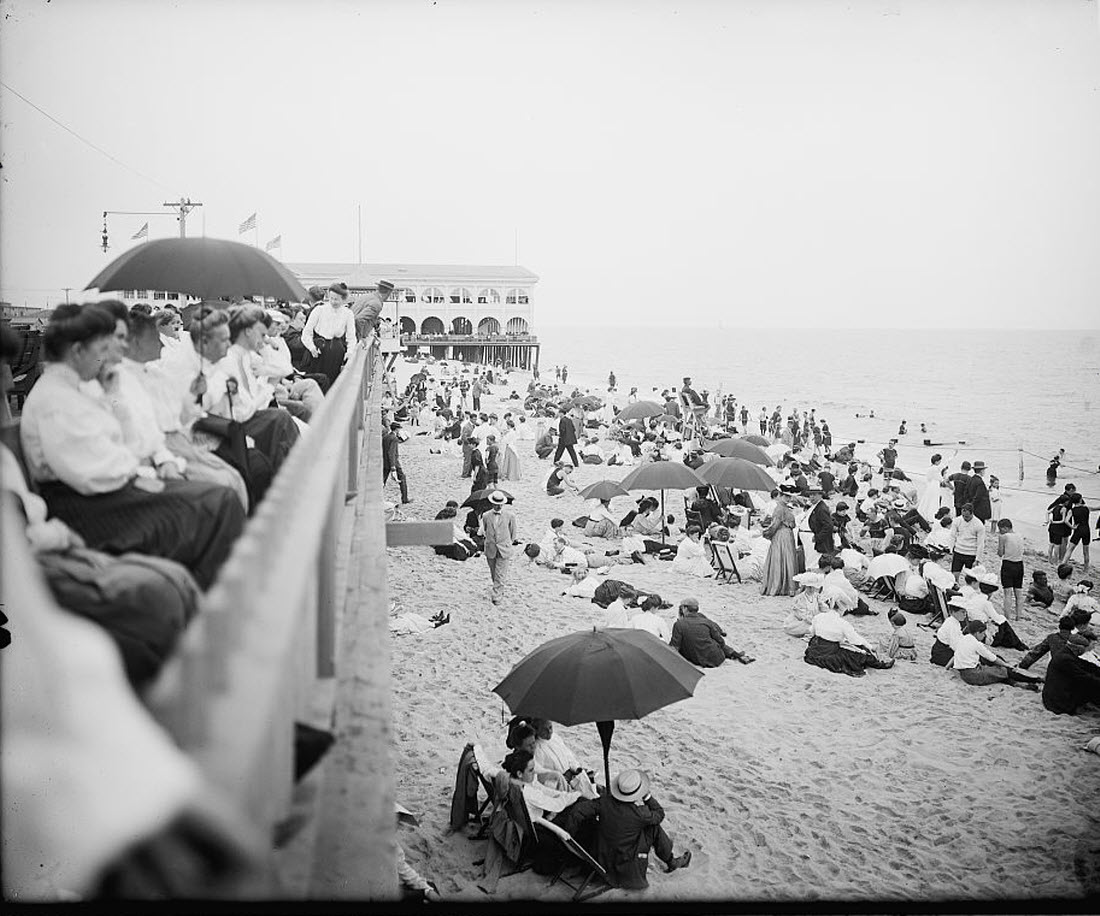 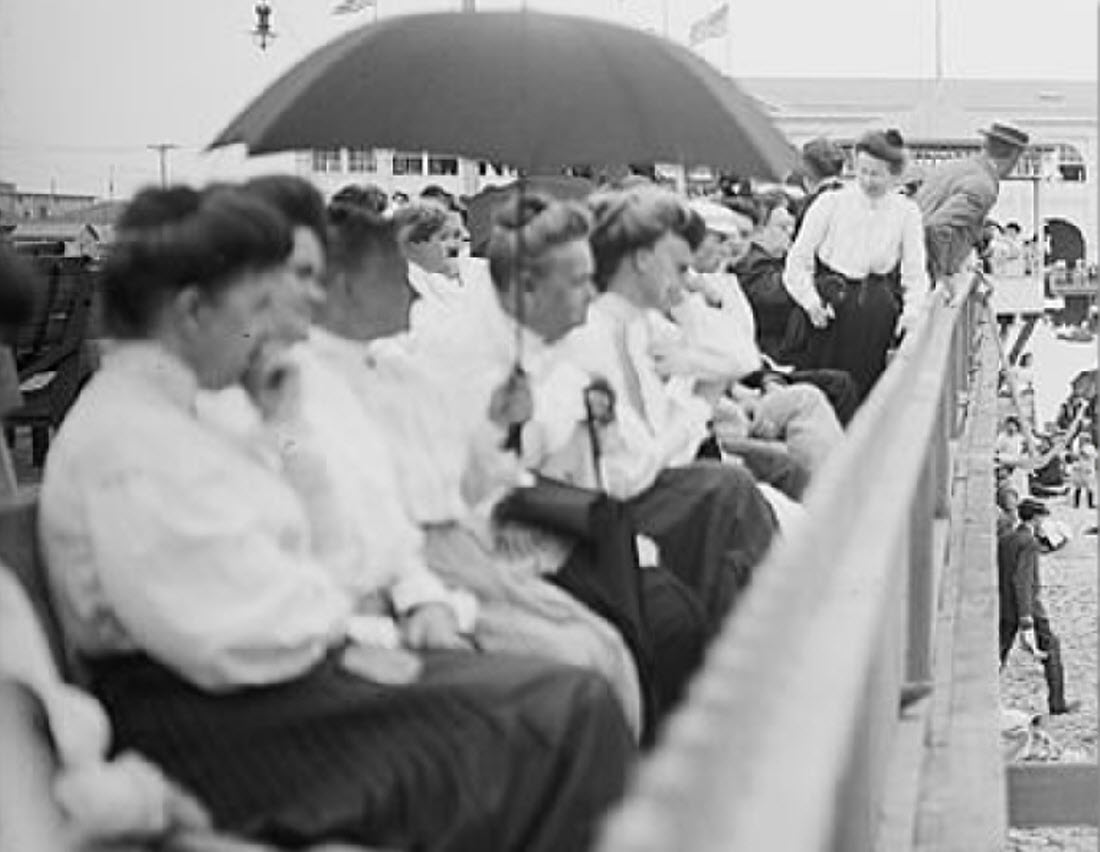 Notice how all the women are basically wearing the same outfits – long skirts, long sleeve shirts and hair done up in a bun. No one is wearing glasses. There are no visible minorities. They are observers, not participators – watching the beach goers below having fun on the beach. Now let us look at what they are watching. Zooming in to the right hand of the picture we can get a better look at the people on the beach. If you weer hoping to see some scantily clad beach bodies, you are going to be disappointed. 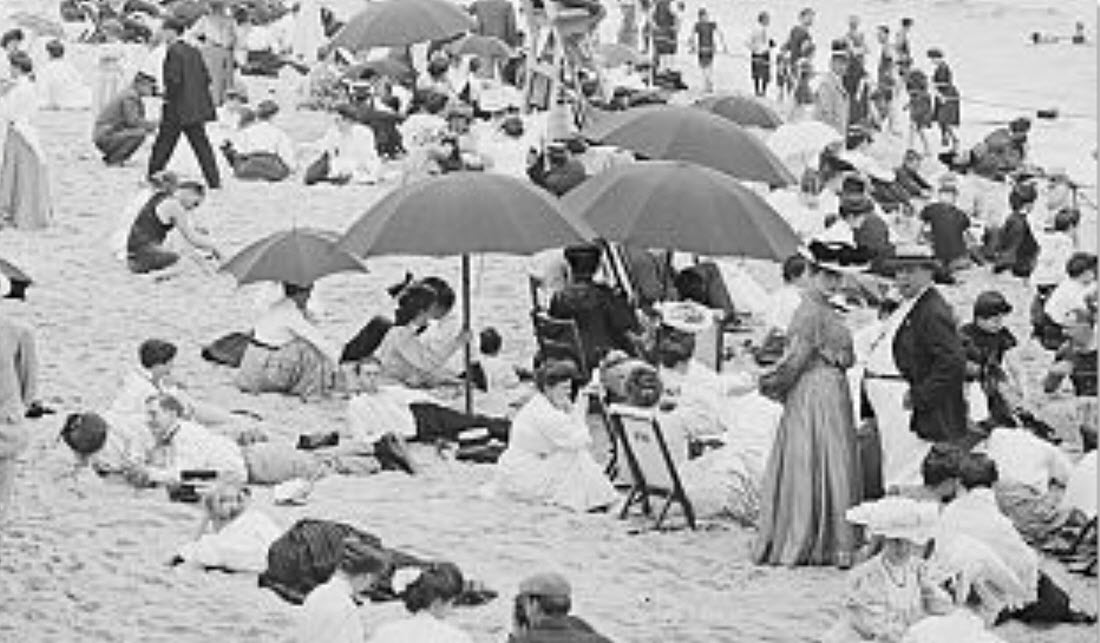 The girls on the beach are a bit more adventurous than the women in the viewing stands. At least they are in the midst of the action. Some are actually talking to young men. The scandal! But they too are all wearing basically the same uniform. Long sleeves, long skirts and hair done up in buns. They seem undisturbed by the women watching them from the viewing stands. I noticed that the women in the stands seem to be older than the ones on the beach and I wonder if they are actually the mothers or aunts of the girls on the beach, keeping an eye on them as chaperones, to make sure that none of girls do anything to compromise their honour.

In any case, this type of extreme modesty at the beach was not restricted to Atlantic city. Here are some beauties showing off their beach bodies at Rye Beach, New Hampshire: 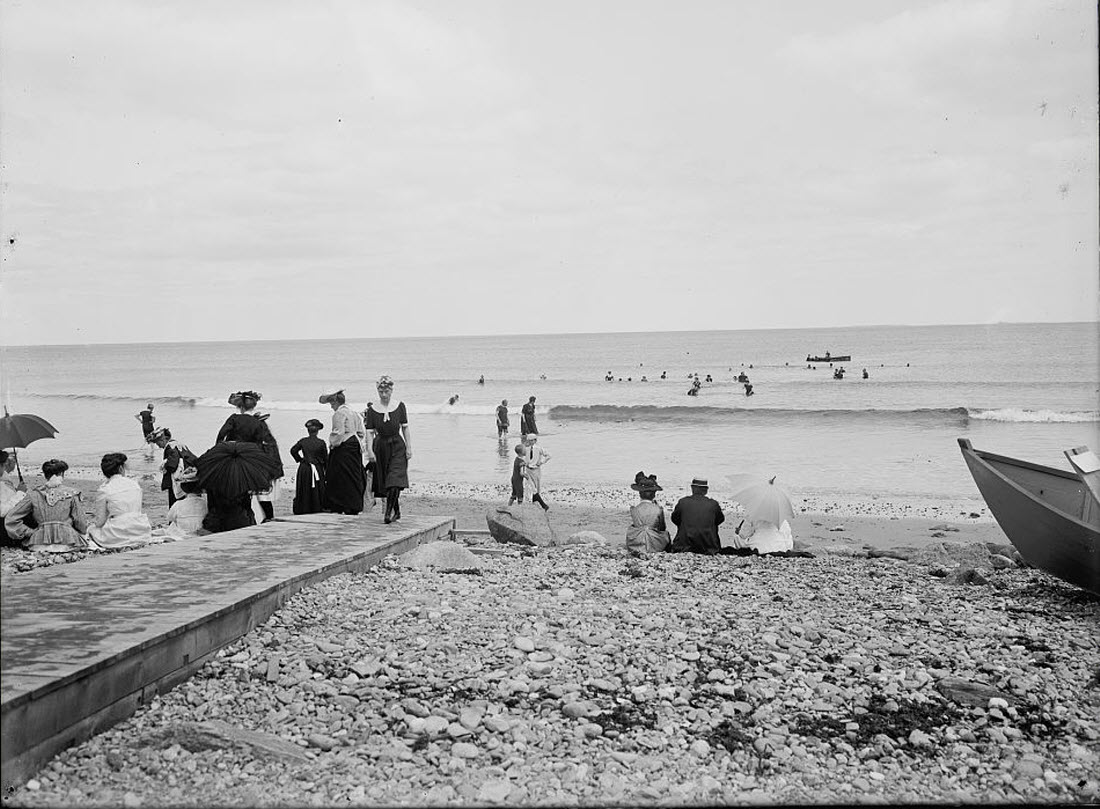 Even when women did put on what could pass as a bathing suit and ventured into the water, they were covered almost completely. Notice the snazzy hats in this picture: 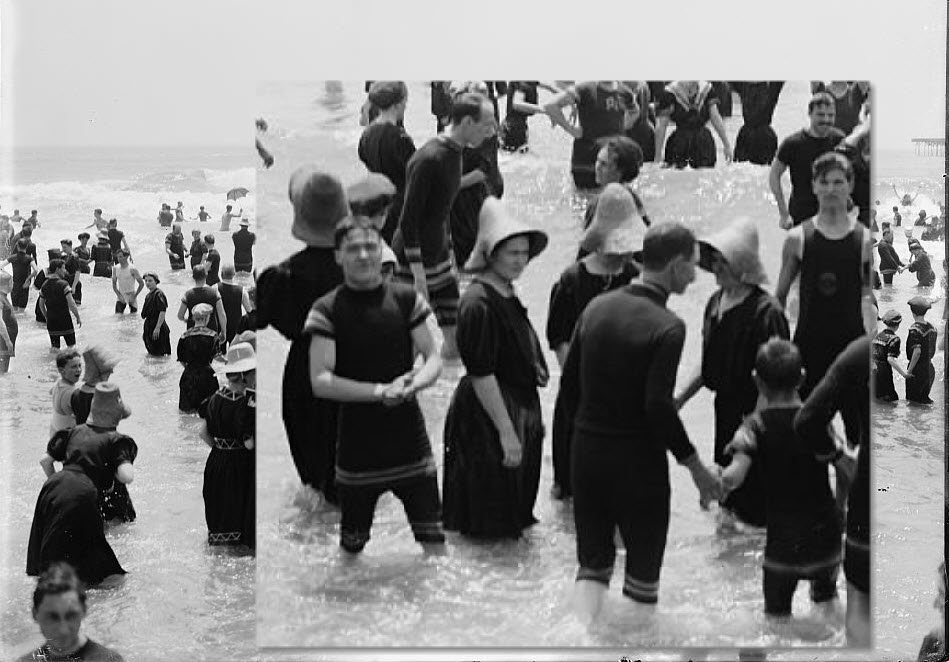 No one seems to be actually swimming. Probably out of fear that if they got their clothes wet, they might become see through or cling to their bodies and lust would get the better of their Victorian era sensibilities.

It wasn’t all seriousness and oppressive modesty, however. Here is a picture of a group of men and women having fun in the water at Atlantic City. Notice however how few women there are at the beach compared to men. 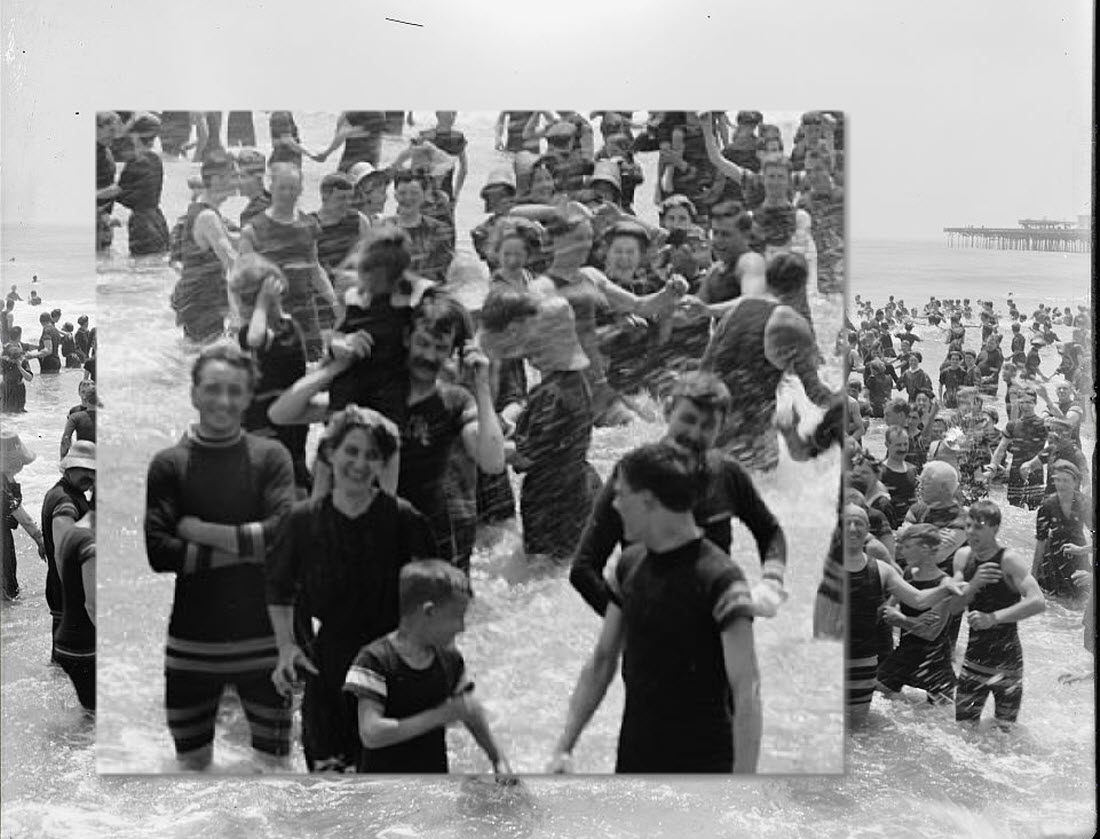 And we can’t forget this scandalous bathing beauty from 1900: 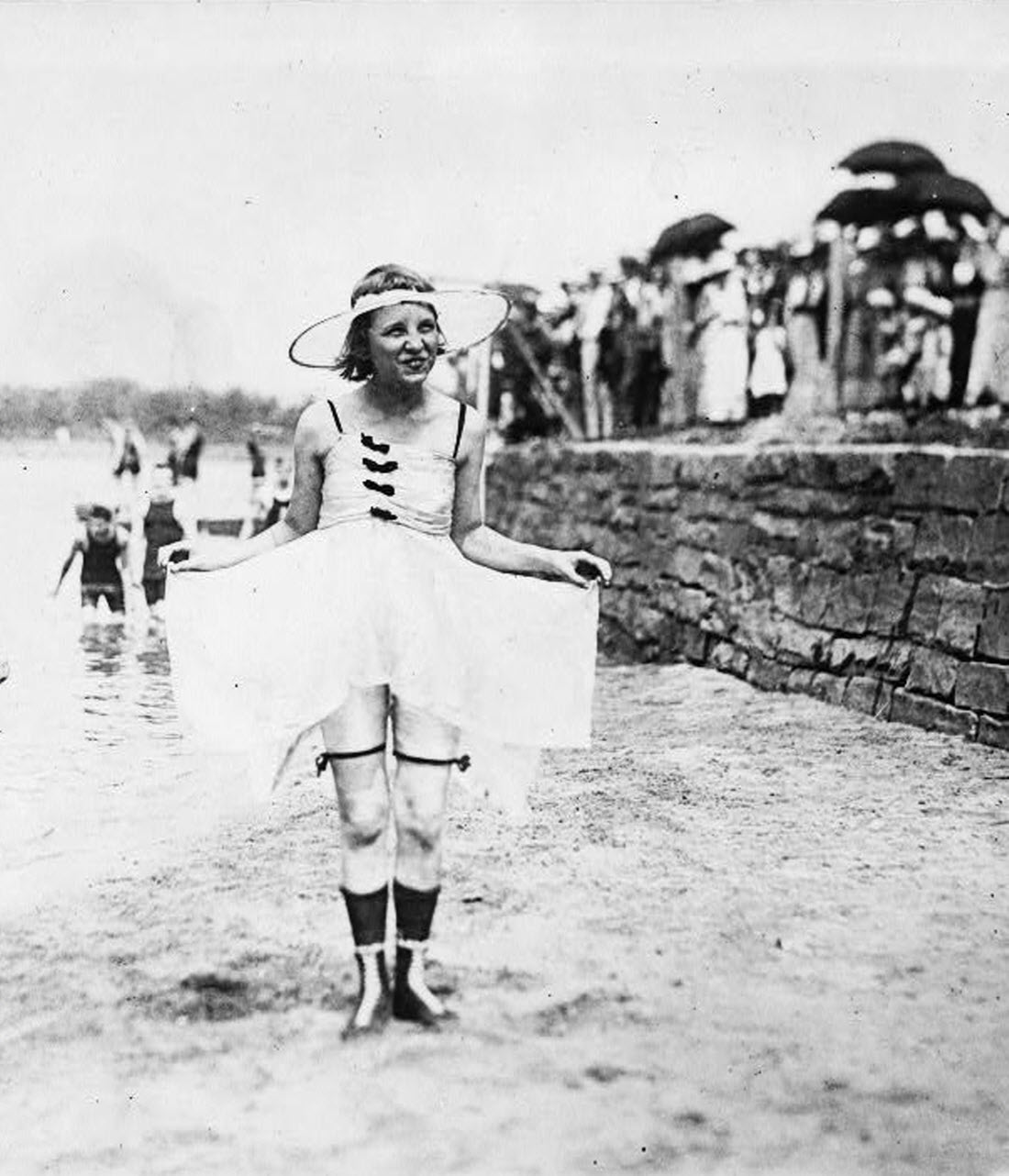