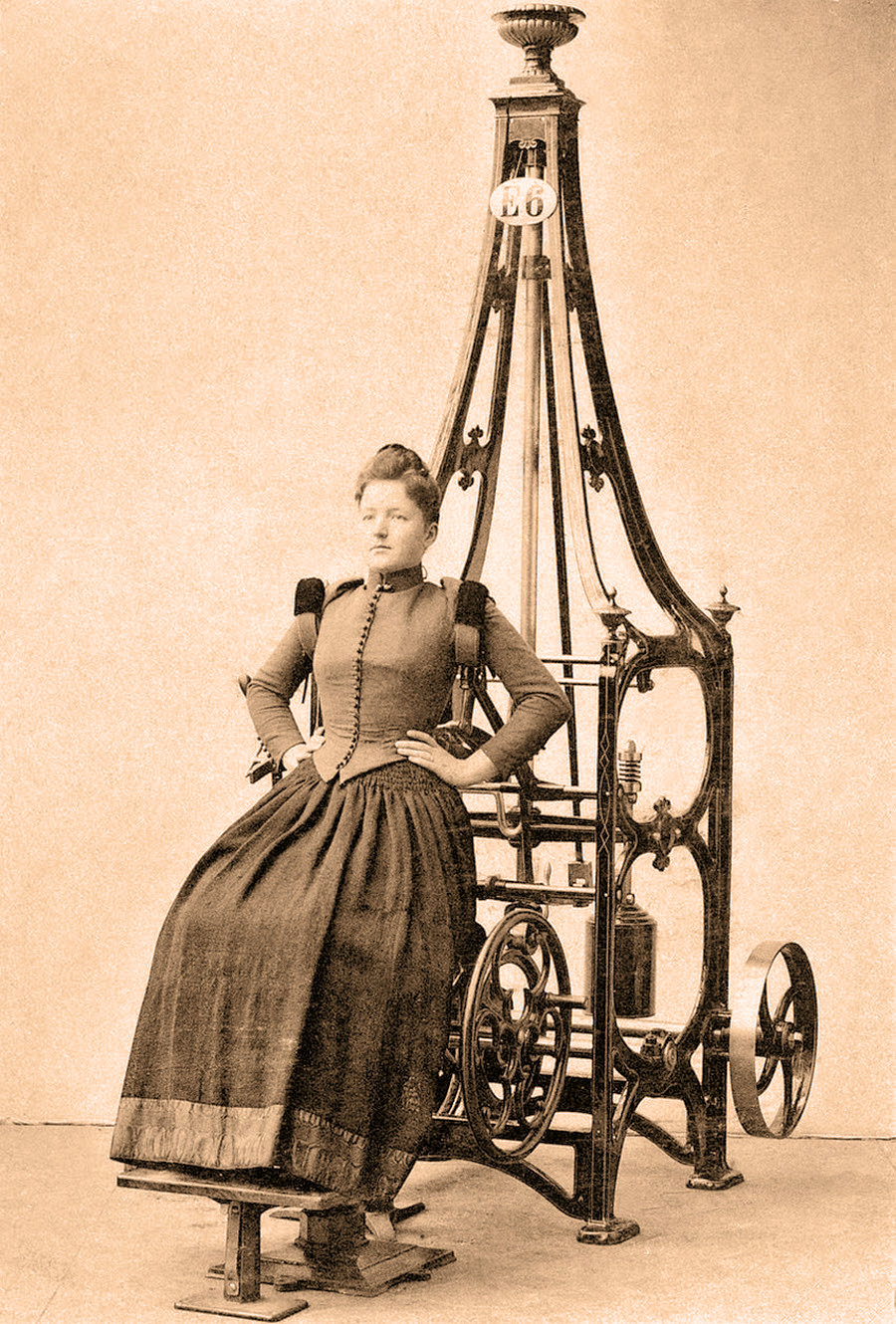 The dapper man in this photo of demonstrating a bicep curl machine from the 1890s. This was one of the many fitness machines invented by Dr. Jonas Gustav Vilhelm Zander (29 March 1835 – 17 June 1920), a Swedish physician.

The Victorian Era was an age of innovation, and exercise and gym equipment were no exception. Starting in the 1850’s, Zander developed machines designed to target and work out different parts of the body. Although many of his contraptions may seem silly today, they were revolutionary and have influenced modern gym devices including Nautiluses, stair machines and others. In fact, as we shall see, the descendants of his machines can still be found in gyms and have also found new life as late night infomercial products.

The device above uses a motor to force the legs apart. The user would try to resist the movement of the machine in order to strengthen his thighs. The speed and force of the motor could be adjusted by turning the handles on the back of the machine.

Readers may note the similarity of this concept to Suzanne Summer’s thigh master.

Dr. Zander’s devices used counter weights and pulleys to mimic human motion but adding resistance and weight to strengthen and tone. This may seem commonplace today, but it is only because of Zander’s innovations that these concepts became standard in the fitness industry. Even more revolutionary, many of these devices used electric motors at a time when electricity was just beginning to be harnessed.

In the photograph directly above, the man is strengthening his abs by sliding back and forth on a table. The machine uses a motor to move the slider back and forth.

Although I am sure that Chuck Norris came up with his device completely on his own, you can see the concept lives on in his total gym.

Below we have devices designed to mimic the benefits of riding a horse. The idea is to force the user to balance against the side to side and up and down movement of the mechanical horse, so as to strengthen their stomach muscles. Given that horse riding was very common during the Victorian era, I am not sure why they needed a mechanical substitute. Note that in the photos the women demonstrating the device are riding side saddle as was the norm for riding real horses among respectable women of that era.

These fitness devices found new life as modern products pitched on infomercials and the shopping channel. Below is a video of a modern day incarnation of Zander’s horse device called the iGallop. In the video, Helen is poking fun at the contraption but I actually have one and it works.

Apparently our Victorian Era ancestors had many of the same trouble spots that we have today. The machines shown below were designed to stimulate the abdominal muscles and tone the back.

The models in the photos are just as interesting as the contraptions. They seem like unlikely gym rats, wearing polished dress shoes, even boots. The men wear suits and the women and long skirts and long-sleeved shirts, consistent with Victorian concepts of modesty. Today’s fitness apparel would have shocked and scandalized these people.

I hope that these clothes were only used for this photo shoot designed to showcase Zander’s fitness machines and that people did not actually wear these types of clothes to the gym. These clothes would have been restrictive and uncomfortably hot. Plus in an era before showers and automatic washing machines, they would have stank.