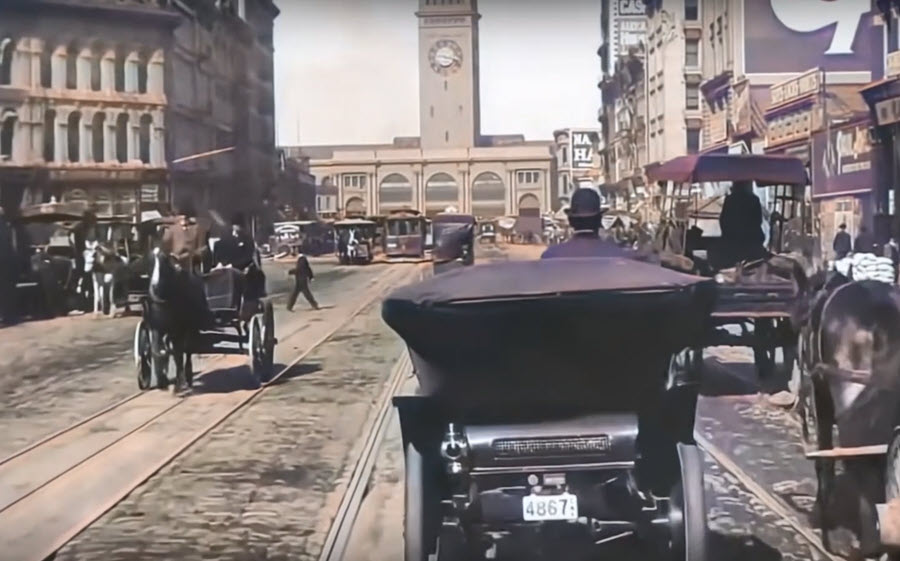 Before Disaster Struck: Just Before the San Francisco Earthquake

The original film was in black and white, but this version has been enhanced and colorized using neural networks. Foley sound effects have been added by Youtuber Denis Shiryaev who has many great enhanced films.

Below is the original black and white video for comparison.

The colorized video is clearly more lifelike and more enjoyable to watch. I recall the controversy that swirled around early attempts to colorize classic black and white movies. Purists argued that the process mutilated the original artistic vision of the director, but in my view colorization is a great tool for bringing the past alive as long as it is done correctly.

The film shows a San Francisco as a vibrant city full of cars, horse drawn carriages and trolleys on tracks. It was a vibrant, booming city, oblivious to the fate that awaited it just a few days later. Shortly after this film, 3,000 people were killed and 250,000 were made homeless. Many of the people we see here likely died or at the very least had their lives upended by the San Francisco Earthquake.

The history of this film is interesting. It had originally been dated incorrectly, with the United States Library of Congress cataloguing it as having been shot in September of 1905, a full year earlier than the San Francisco Earthquake, based on the buildings in the film and their state of construction.

However, thanks to excellent research by film historian David Kiehn and others, it was later determined that the film had been shot in 1906, just four days before the San Francisco earthquake, which makes the footage even more poignant and interesting. Kiehn was able to determine the date of the film based on automobile registrations weather records, and even the sun;s shadow to determine the month and year.

The viewer will note that the streets are wet from recent rain, and fortunately it had not rained in the three previous months, which made it possible to narrow down the date. However other researchers have concluded that the video was shot several weeks before the earthquake, and not a mere four days before. This was an amazing level of sleuthing worthy of the best police detective.

A Trip Down Market Street

The film, titled simply A Trip Down Market Street was the work of the Mill Brothers (Harry, Herbert, Joseph, and Earl) who were pioneers in American cinema.

The film was shot from a street car and shows a bustling American city at the start of the 20th century. The camera travels from 8th Street to a cable car turntable and finally to the Embarcadero continues eastward to the cable car turntable, at the waterfront Embarcadero and the Ferry Building. The camera records a lively, even chaotic, city life full of automobiles going in various directions, seemingly without any traffic controls. However film historians have noted that many of the same automobiles are seen going by several times, indicating that the scene had been staged by the Miles Brothers perhaps to portray the city as busier and more modern than it actually was.

The Miles Brothers’ movie studio was destroyed in the San Francisco Earthquake, but fortunately two prints of this movie had been shipped out east and were saved. Despite the loss of their studio, the Miles Brothers were able to shoot scenes of the aftermath of the earthquake, showing a devastated San Francisco.

We are indebted to Miles brothers for this wonderful footage of San Francisco at the dawn of a new century and on the eve of disaster. And we are also indebted to the film historians, archivists and film restorers who have given this movie new life and color, showing life just in this beautiful city, just before the San Francisco Earthquake.