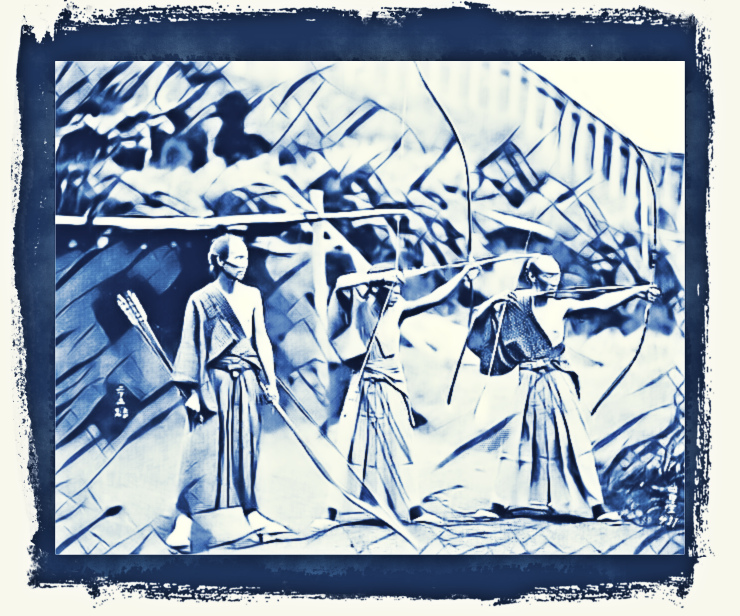 This rare photo from 1860 Japan shows two Samurais training to use a bow and arrow while their seasoned instructor looks on. First let’s look at the photograph and then discuss its historical context and some of the very interesting details that you can see if you look closely.

Imperial Japan had pursued an isolationist policy almost from its first contact with Europeans. Fearful of befalling the same fate as China and India, the Japanese had blocked foreign influence as much as possible. Christian missionaries were forbidden, and except for a small Dutch delegation restricted to a small island in Nagasaki Bay, no European traders or ships were allowed into Japan. In this way, Japan hoped to avoid becoming drawn into the orbit of more powerful European nations, which had the potential to disrupt their society and jeopardize the independence of the Land of the Rising Sun.

In a brazen example of gunboat diplomacy, the United States sent a squadron of warships to Japan as a show of force. The goal was to force the Japanese to open their country to foreign trade and establish diplomatic relations with the U.S.

The American vessels, which the Japanese referred to as the Black Ships, steamed into Japanese waters and ignored demands that they leave, threatening force. After tense negotiations, Japan gave into the inevitable and opened itself up to trade. But unlike other less advanced nations of the time, Japan did not allow itself to become a European colony or vassal state. It embarked on an unprecedented program of modernization, copying western technology and industrial techniques. Within 50 years it had risen from a primitive backwater to a leading world power capable of fielding first class battleships, and defeating the Russian Empire in the Russo-Japanese War of 1905. This war not only shocked the West but opened the way for Japanese imperial ambitions on China, which would contribute to Japan’s entry into World War 2 against the United States.

The only historical parallel is China’s current effort to modernize by copying and stealing Western technology.

However change did not come overnight to Japan. Age old medieval traditions lingered on even as the country built steel mills and railroads.

The Samurai were a class of elite hereditary military nobility. As elite warriors with a code of honor, they resembled but were in no way the same as European knights. The Samurai were in existence from from 1200 until 1870 when Japan made the decision to modernize its army and adopt the German conscription model. Their hereditary status and government salaries were abolished in 1870, ending a proud tradition. However, their ideals and code of combat continued to influence Japanese military ideology and is even today a part of Japanese society, including business strategy.

The photo shown here shows two men training in the art of archery, less than ten years after the opening of Japan by the warships of the United States, and a mere decade before their entire way of life abolished. It is therefore a remarkable picture of a Japan in transition, of three Samurai warriors still holding on to the old ways, even as the world around them changes forever.

One of the remarkable things about this photo is that the men in the picture do not fit our preconceived ideas of what the Samurai were like. We have been accustomed to Hollywood depictions of Samurai in suites of armor, with an imposing physical presence. Below is another photo from the period, showing a Samurai wearing a suit of armor. This is the image that we are more used to seeing.

The three archers in the first photo are nothing like what we have come to expect the typical samurai to look like. Not to mince words, they are scrawny and not at all muscular. They do not even seem they would be much of a threat in hand to hand combat. Of course, appearances are deceiving and their superb skill in martial arts likely made up for their lack of brawn.

It is also interesting to see what they are wearing. The men are wearing clothes that leave their shoulder free to better draw the bow. The instructor is wearing special wooden shoes designed for walking in muddy, rough terrain. Although a completely different design, they remind me of the Dutch wooden clogs.

Let’s look at some magnified details from the first photo:

Note the simple bows used by the men: they are nothing like the compound bows used by medieval European archers and likely have more in common with the types of bows and arrows used by Native Americans prior to the introduction of rifles.

The unimpressive physique of the men is also interesting. Despite belonging to a professional warrior caste, at a time when hand to hand combat was still expected, they are not heavily muscled. However their intense stare leaves no doubt that they mean business.

Their traditional Japanese clothes are very interesting consisting of a skirt, or more accurately something analogous to a men’s kilt, and a loose fitting top with their left arm exposed. Each of them has an arrow cocked and another ready to load; their expertise likely allowed for a high rate of accurate fire.

In the enhanced detail above you can see the unusual shoes worn by the archery instructor. They are platform shows standing on two parallel pieces of wood. These shoes were used for walking on muddy terrain. They would likely not have been very good if you needed to move fast.

End of an Era

Like the era of the samurai, we have now come to the end of our photographic journey to old Japan. Let us say goodbye to these holdovers from a bygone era, until our next trip into the past.