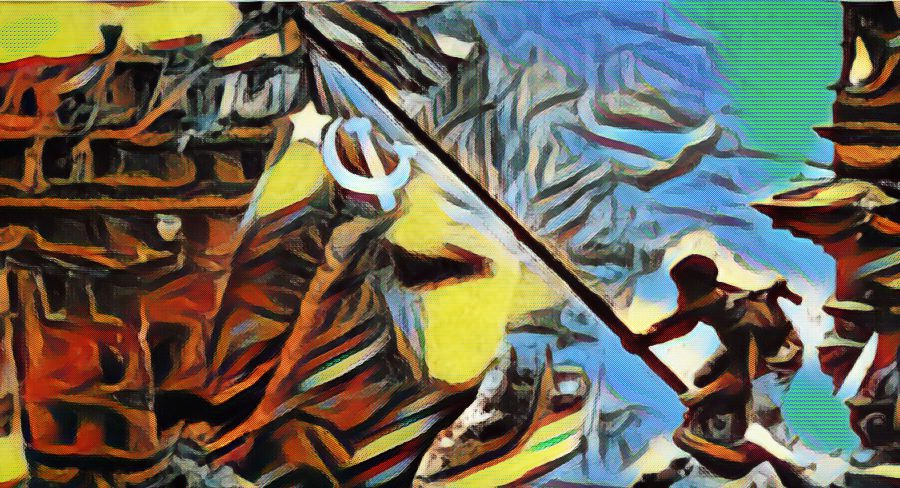 Soviet Flag Raised Over the Reichstag

This photo ranks with the raising of the American flag on Iwo Jima as one of the most iconic photos of World War 2. It shows a young Soviet soldier raising the flag of the USSR on the roof of the German parliament building, even as fighting and smoke fills the city below.

It is a beautiful, evocative photo full of movement and conveying both the triumph and sacrifice of war. It is also, like all Soviet war photography, pure propaganda and staged as well.

The official story is that the Soviet soldiers had raised the flag even while room to room fighting had been raging inside the building, and that they had risked their lives to raise the flag under enemy fire. The sight of the Soviet flag flying atop the center of Nazi government symbolized the triumph of the Soviet Union and the final defeat of the German Reich.

However the shot was not spontaneous and not even unedited. The actual photo shoot had been planned by Soviet war photographer and staged for maximum theatrical effect. Even so, the results were not triumphant or dramatic enough and so Yevgeny Ananyevich Khaldei (23 March 1917 – 6 October 1997)altered the airbrushed and edited the photo, adding in smoke and elements such as tanks and planes in the background, and removing the soldier’s two wrist watches, so that the fact he had been looting like all his comrades would not be apparent. The photo is actually a reenactment of an earlier flag raising, which had not been photographed.

Khaldei’s photograph bears some resemblance to the Joe Rosenthal’s equally iconic photo of the flag raising on Iwo Jima. This is no coincidence. Khaldei had seen the Iwo Jima photo and decided to copy its aesthetic.

Despite having created one of the most iconic was photos, and creating a propaganda coup for Stalinist Russia, Khaldei’s career faltered after the War and he was even terminated by the newspaper he worked for, ostensibly due to downsizing, an unheard of thing in the bloated bureaucracy of the Soviet Union. A human resources/political evaluation of Khaldei indicated that the praise he had received for this photo had gone to his head and he had failed to continue developing as a photojournalist.