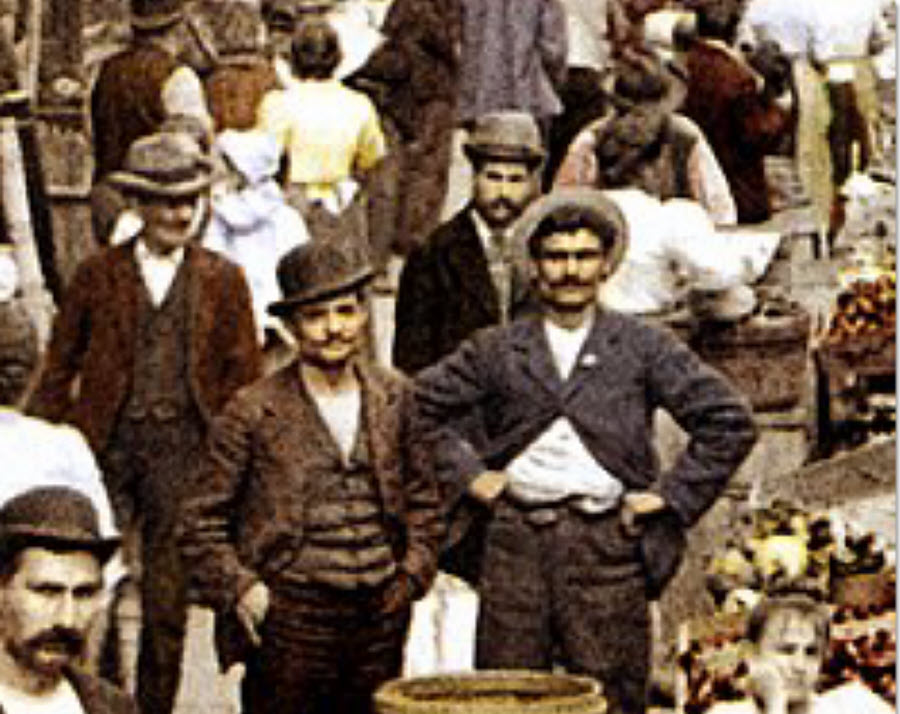 Below is a famous color photograph of Mulberry Street, in New York City taken in 1900 at the heart of the city’s Little Italy district. It shows a moment in time in a busy ethnic neighborhood. You can imagine the sounds of kids playing, people haggling in Italian, horses clip-clopping down the streets, the smell of baking and food being prepared.

In the West we are no longer used to this kind of vibrant street life. Even in the bigger cities, people ride their cars or take public transport to get from one place to the next; they spend the least amount of time possible on the street. The street vendors have been replaced by malls and online shopping. We no longer have personal interactions with grocers and shop keepers, haggling over the quality and price of an item. Children no longer scurry everywhere, partly because families are smaller, but also because children now have more structured lives, no longer living free range and an integral part of their parents’ lives. Nowadays children are likely to spend more time at school or with babysitters than with their parents. But the world in this picture was different. Children were constantly underfoot, accompanying their parents in their daily activities, playing and running about with little structure. This was a very different place and time.

And Mulberry Street was different than the rest of New York. It was a crowded enclave populated almost entirely by Italian Americans, many just arrived from Italy. Most did not speak English and on Mulberry Street and its environs, Italian was the dominant language and Italian culture, especially that of Southern Italy where most of these immigrants came from, was the dominant culture. Mulberry Street was definitely not a genteel or even a middle class neighborhood. It had its fair share of social problems including poverty and crime. Respectable Anglo-Saxon residents of New York looked down on Mulberry Street as the worst kind of neighborhood, full of uncouth foreigners, and worst of all Catholic foreigners. More than one writer and social activist of that era used Mulberry Street as an example of the dangers of immigration.

There is so much going on in this picture that it is hard to take it all in. I have taken segments of the photograph and enlarged them in order to enhance the detail and allow you take in the cacophony of sound and movement that made this street alive and vibrant.

This is an enlarged detail showing the group of men to the left of the photo. They are standing on the sidewalk, staring aggressively at the camera. They look tough; the kind of men who would carry a knife on them and wouldn’t hesitate to use it. What was their story? Were they part of a gang? We can speculate on how they earned their living. Whoever they were, these are not the sort of men a visitor to Mulberry Street would want to offend.

In contrast to the hard looking men in the previous photo, this detail shows a lot of kids and their parents hanging about the produce seller. The scene looks friendly. The children and some of the adults look at the camera with curiosity, smiling and enjoying the novelty of having their picture taken. On the far left we can see a woman in white, the green grocer, looking a bit bored.

Above is a magnified view of the shoemaker’s shop found on the right hand side of Mulberry Street. We can see the shoemaker’s sign, an image of a boot, and the shoemaker himself working his trade. A little girl in white appears blurry, moving too fast for the camera.

Here we see a busy seen. A few men are staring straight at the camera but otherwise life goes on unaffected. Horse drawn carts go in every direction while children scamper in between the traffic.

A lot has changed in over one hundred years. Italian Americans have become integrated into the fabric of American society and Mulberry Street is no longer a world unto itself. But Mulberry Street remains the center of New York’s Little Italy. It is a a very different neighborhood than it was then. For comparison, below is a video showing what Mulberry Street is like today. I will let you decide if