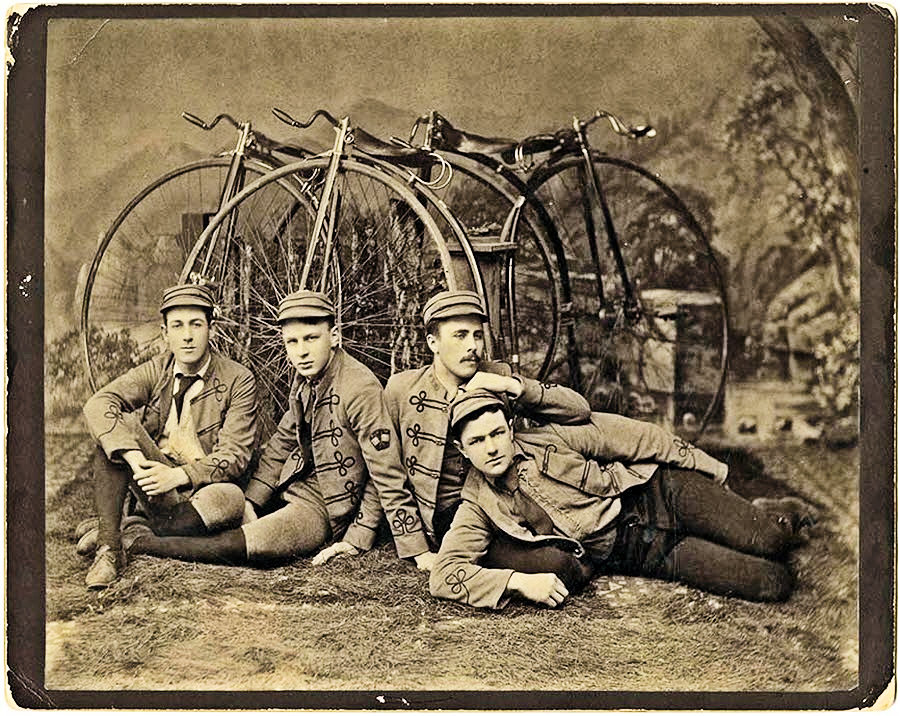 It is an interesting historical coincidence that the bicycle and the automobile were developed at roughly the same time, and both achieved their first practical commercial success and mass adoption around the 1890s. In time, the automobile would eclipse the bicycle in Europe and North America, but in the 1890s, bicycles were the newest technology and quickly finding new converts to this technology throughout the United States and Europe.

These early “penny farthing” bicycles required nerves of steel and consummate skill to ride. They had huge, ungainly, front wheels that resulted in a high center of gravity and made them unstable. They had no brakes. They had no gears. They had no suspension. They were basically two wheels held together by a frame. And of course they did not have any of our modern light weight alloys so these huge contraptions were heavy and required a lot of muscle to pedal them.

Below is a shot of the bicycle handles and seats of the bicycles in the background. Note the lack of breaks and the back breaking seats with no padding:

Despite all of their shortcomings, bicycles were popular. Even before the automobile, they gave people new mobility and range. Outings into the country became popular in Europe. Many bicycle clubs and associations were formed to promote the new bicycle technology and to give members a chance to socialize and compete with fellow cycling enthusiasts.

One of the most influential of these cycling clubs was San Francisco’s Bay City Wheelmen which did much to popularize and advance the sport of cycling in San Francisco and throughout the area. Founded in 1884, the Wheelmen were a breakaway faction of an earlier cycling club and their rivalry would continue for years and spur many legendary bicycling races and exploits. These clubs would popularize the sport and draw many new cyclists to the passtime. The Wheelmen were also responsible for constructing one of the first circular cycling tracks with cement paving.

When you see the size of the their bicycle wheels it is not surprising that they called themselves the Wheelmen. In fact, cycling during this era basically involved perching yourself on top of a gigantic wheel. A tiny back wheel closer to the ground provided a minimum of stability. There were no gears and as a result no assistance with dealing with the legendary hills of San Francisco, which makes their achievements even more spectacular.

This photo of the San Francisco Wheelmen was shot in a studio around 1890. Note their uniforms which appear to be of fairly thick material, and would have made cycling difficult and sweaty especially in hot weather. Below are a couple of closeups of the cyclists.

You can find more information about the Bay City Wheelmen as well as a scrapbook of photos from their glory days here.